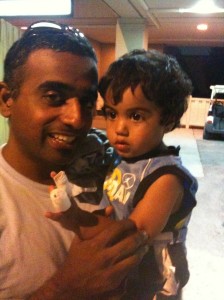 Eli J and Dad outside the ER

The numbers in the title are just guesses (and probably generous guesses at that) at how often I have found myself humbled as a mom. Awesome moment number 98 is not necessarily my fault, but still was a pretty low moment as a momma of two boys; number 99, on the other hand, is 100% my doing! Good thing the boys are troopers and are incredibly resilient and forgiving.

While in Myrtle Beach for the end of the Leadership Project, we were enjoying a sweet time with the future Clemson staff team at Salsaritas. While the staff people were “talking shop” inside (serious convos are usually my cue to take the choas outside!), the boys and I were having a blast playing hide and seek outside on the patio. It really was one of those moments where you think, “I love this. I love them. It is only 100 degrees, not 110. It doesn’t feel like we are in Myrtle Beach.” About two minutes later, shalom was shattered when Eli J and a wrought iron chair took a big fall on some concrete. By the grace of God, I did not fully realize what had happened, because I would have lost it; however, Eli had completely torn off two fingernails on his left hand and was in obvious pain. Poor little man, he was a trooper. We spent about an hour waiting at the Myrtle Beach Emergency room (think Wal-Mart at like 2 am); despite being in terrible pain and the wait, Eli managed to make friends with a large number of people, introducing himself in his traditional manner: “I’m daddy. No, I’m mommy. No, I’m Ty Ty” (boy has such a sense of humor). Also, we saw an Elvis impersonator there (only in Vegas and Myrtle Beach), so that was distracting and entertaining! All that to say, the little soldier is doing well and was fine by the time we left; so fine, in fact, that he was waving his bandages around and batting big old brown eyes at the college girls who were swooning over him. He got candy and prizes and notes… He was loving it. He does not even notice he is hurt anymore, meanwhile, I am paranoid and my new mantra is, “Watch Eli’s fingers, Ty! Be careful”

As odd as it sounds, it was a sweet time with G and Eli (an anniversary getaway, if you will). Even though we could not do anything to really help, Eli was comforted to just be held by us, to just be near us. I was so challenged by his desire to just be near. I want to be that way with the Lord. I want to be comforted by His presence when I am struggling, not just demand that he fix things.

Driving home from errands, including but not limited to going to T.J. Maxx to pick out a birthday “shoe shoe” for Ty and a “Mom is a sucker shoe shoe” Eli, we were all pretty cranky and ready to get home and nap. Great plan, right? yeah, until I locked the keys, my phone, and get this one.. the boys in the car parked in our garage. This is one of my greatest fears, so I actually have my keys on a carabeener and hook them to me when I get out of the car usually. Nope, not this record-high temperature day. We have no land line, no neighbors were home… awesome.  I finally got in touch with G via email and he got our spare key (yep, did not have that either!) after 30 minutes. Ty had fallen asleep by then, frustrated at my attempts to coach him to unbuckle his car seat and climb into the driver seat to unlock the car (the two things I constantly tell my children to not do because they are “Very danger!”). Poor Eli was just looking at me and screaming, asking me for his juice. I have always wondered how moms can do these super human feats to rescue their children, but today, I understood. I was about 2 minutes from breaking the window to get them out when the key came. The sweet boys recovered in about two minutes and were playing with their trains, but I am pretty sure I may never recover from this mommy mishap. I am awesome!

More to come later, I am sure!