I have a love/hate relationship with hospitality. Had I known my future, I most assuredly would have chosen a degree in the Hospitality or Event Planning department; however, being an ambitious nerd, I chose Biology and English.

These degrees suit my inner self well, in that I am bookish and like ideas. However,  ministry lives in the realm of people and places. Thus, I find myself largely ill-suited for the majority of my calling.

We host. A lot. Mostly because we have a home, and most of our peoples are younger and living in dorms or small apartments. But also, I think, because God has had it on His syllabus to teach me a thing or two about hospitality.

Were I given a say in my course selections, I would not gravitate this way. I would choose Ancient Greek or Hebrew, diction or delivery of speeches. However, weekly, I find myself (my not-so-great-at-cooking, horrid-at-baking self), hosting events in our home.

While some people can plan an event on the backstroke, I mostly doggie-paddle my way, all frantic and spastic and splashing.

No matter how early I start prepping, I am always at least 30 minutes behind which means that the first guests play the role of servants. Chop this. Carry that. Help me to make it appear that our house is at least up to sanitation standards. Light the candle. All the scents to cover up the fact that I did not get around to mopping, though I had it on my mind all day.

I feel naked when I host, because it is so clearly not my strong suit. Yet, the Lord keeps me here, as a place keeper and a space maker. 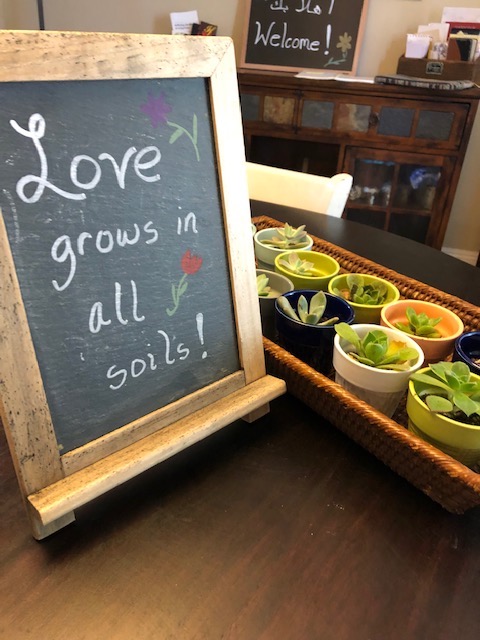 I am beginning to accept this role. After all, He says His power is most beautifully staged on the backdrop of my weakness. And I have a lot of weakness in the hosting department; thus, I am an oft-played upon stage.

Bethany has helped me. You know, the small town outside of the city that Mary, Martha and Lazarus called home. I think of that little speck on the map on the regular because Christ seemed to gravitate there on the regular.

When the crowds and the weight of His calling made Him feel claustrophobic, His feet seemed to find their way to a small house in Bethany. I am certain it was not anything to write home about. It most certainly would not have been featured in Middle Eastern Homes & Gardens, if such a publication had existed.

But it was welcoming and warm, and they made space for Him, not just physically, but emotionally and relationally.  Mary was bookish and not good at house-keeping, but she kept place for Christ. I want to be like her.

When the Giver of all things
Became a guest
He was unwelcomed, at worst,
Tolerated at best.
Except in Bethany-
There He found rest.

In their small, unassuming,
Modest place,
The Maker of mountains
Was met with grace.
By aid of mat and meal,
He slowed His pace.

In their warm presence,
He long did loom.
Silence, laughter, tears,
Crowded the room,
As Light shadow-boxed
With a coming tomb.

2 thoughts on “On Hospitality”