Kids in costumes and free candy. A wonderful combination. We are gearing up for Eli’s favorite holiday, as his leading motivation in life is candy.

While making a photo book the other day (just a couple five, couple six years behind), I came across some hysterical Halloween pictures from the Ghost of Halloweens Past. 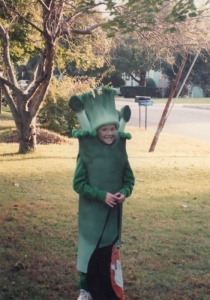 That time when I was about Tyus’ age and I wanted to be asparagus for Halloween. Yep, that was long before Veggie Tales had made their debut (and it is doubtful I would have been watching those prophetic veggies even if they had). I just wanted to be a veggie, an unpopular one at that, for Halloween. My mom commissioned by Uncle to create this gem for me. Thanks, Uncle Chris. My kids now have a wonderful way to laugh at their odd mother. I promise I had friends and a very happy childhood. 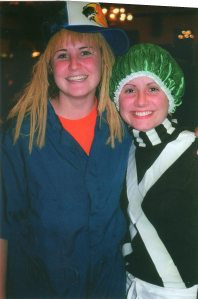 Or that time in college when my best friend, Krissie, and I entered the Halloween Costume Contest at our school’s one and only dining hall, GDH. Because that is what you do when you go to a small liberal arts school in the middle of nowhere. I am not sure what or who I was, but I do know that Krissie was the best Oompa Loompa ever and won the grand prize $100 worth of points towards buying the coffees that sustained us through 8 am classes. 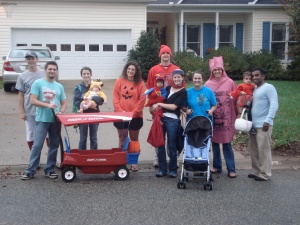 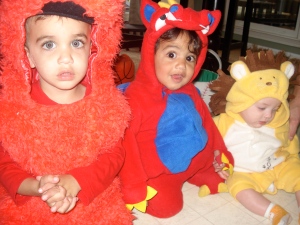 Or that time when we went trick or treating with our college ministry friends, using our token three small children as a ploy to get candy for the adults. Also, this was the same Halloween when we would ask Tyus to use baby sign language to sign “Thank You.” He kept doing the “More” sign. We let people think he was being polite. Joke’s on them. 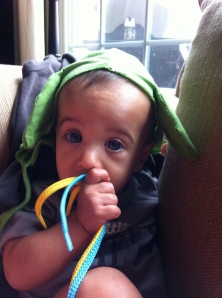 Or last Halloween, when I decided that it would make me a more complete mother if I could learn to sew my baby’s own Yoda costume. Yep, that was a short-lived stage. But I am thankful that I made a friend out of it. Thanks, Lauranne, for basically making Phin’s Yoda ears. From now on, I will stick to what I am good at (which we learned is not sewing). I am better at buying cute costumes on Etsy and helping artists put food on their tables. 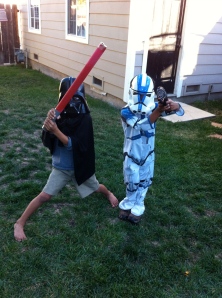 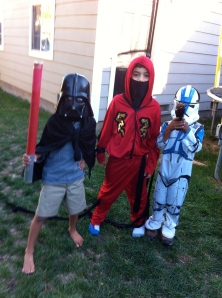 Same Halloween, everyone is happy for the next few hours leading up to the infamous Storm Trooper Meltdown. My little Stormtrooper went AWOL after too many pieces of candy, a long week with Daddy out of town, and other factors, including his punk nature. Just imagine a tired Princess Lea momma carrying a flailing Storm Trooper over her shoulder, while he yells to the entire city of San Diego, “You are the worst Mommy ever!” ad nauseum. That was an awesome Halloween. I hope we can run that play again. 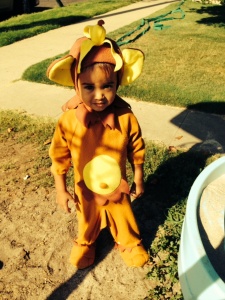 This Halloween we will be traveling to the East coast for a dear friend’s wedding. Not willing to miss an opportunity to put my toddler into an animal costume, I dressed Phin up early as a monkey for a photo shoot. He really loved the whole experience, as you can see in his face. Here’s to many more years of awesome stories and costumes.