I thought I was competitive until I married my husband and parented his little carbon copy, Eli. It turns out that I have a wee bit of competition mixed with a whole heap of collaboration. But not those two; they are all competition all day long.

Ty and Eli had two very different responses to close championship soccer game losses this past weekend. Both teams lost by one goal in overtime and both teams got the same silver medal and recognition. One child gladly smiled and donned his silver medal with pride while the other sat and stared at the medal for a good 15 minutes in disgust before he would  put it on even briefly. 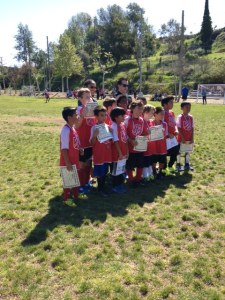 I often wrestle with how to steward Eli’s strong sense of competition, his obvious dissatisfaction with coming in a close second.

Competition gets a bad wrap often in the Christian world. A lot of Christian sports programs don’t keep score and refuse to make distinctions between first, second, and third places. “Everyone is a winner,” they proudly proclaim. As a momma, part of me understands this line of thinking, because no one wants to lose. Losing is hard. It hurts to watch others carry around a trophy larger than my toddler. But it is healthy and good for children to experience both success and failure.

Competition, as any other drive, can be taken out of hand, but does that mean it should be completely dismissed as a result of the Fall? Is there something laudable and innately right underneath all of that broken stuff?  Maybe it was because I had soccer on the brain, but as I was studying Paul’s letter to the Colossian Church yesterday, I saw a strain of healthy competition that I had never seen before.

The first chapter of Colossians along with the first chapters of Hebrews and Ephesians are a wealth of Christology, the study of the person of Christ.  Paul continues a rich strain of descriptions of Christ when he writes the following:

“He is the image of the invisible God, the firstborn of all creation. For by Him all things were created both in the heavens and on earth, visible and invisible, whether thrones or domains or rulers or authorities – all things have been created through Him and for HIm. He is before all things and in Him all things hold together. He also is the head of the body, the church; and He is the beginning, the firstborn from the dead, so that He Himself will come to have first place in everything. For it was the Father’s good pleasure for all the fullness to dwell in Him.”

It seems Christ is dissatisfied with second. God would have Him, will have Him, have first place in everything. The Greek word arche, translated as beginning, connotes not only an ordinal meaning but also priority. Similarly, the Greek word protos translated first throughout this passage means the most important, the principal, the highest priority, the chief.

God proudly declares that His perfect Son will have supremacy and highest priority in the hearts of His children and throughout the world. What a healthy picture of competition. God is not okay for Christ to share first place, to tie with a few other beloved people or things.

He will not allow His Son to slip to a place of close-second. When that happens in our lives and in our souls, He will graciously point out and correct the swapped priorities. For where Christ reigns supreme shalom, the Hebrew word for full-orbbed peace, flows. But where Christ slips to second discord follows.

I am so thankful for a Father God who refuses to let Christ be just another god among many. I am thankful we serve a God who is competitive in the most healthy way. I pray that somehow God would use competitive drives in my boys to advance the highest good, the One who deserves first place in all things. I pray that they would continue to be dissatisfied with Him in second.