On the side, as a way to support himself when the support money was running low, the apostle Paul was a tent-maker. I have always read Paul’s tent-making as a hard-working man doing whatever it took to be able to fund his true calling, the spread of the gospel around the known world, without being a financial burden on those to whom he preached. While this is most assuredly true, a part of me wonders if Paul actually looked forward to the chance to work hard with his hands.

Paul was an intense, type-A fella. If you are wondering, just look at his lifestyle before his encounter with Christ. Dude was on the Pharisaical fast-track, knocking people down and taking names. After his radical encounter with Christ, his intensity changed trajectories but did not disappear.  His zeal took a u-turn from being directed against Christians to being channeled to sharing the gospel those who had not yet heard the glorious news of Christ’s love displayed on the Cross. I love how Christ allows continutity in His new creations. They are changed completely and yet very much the same.

For intense, driven types, (not that I know anyone like that) vocational ministry can be as maddening as it is magical. The thing about soul work is that it is never truly complete. Paul would lead people to Christ, labor hard at teaching and training them and then wind-up the local church in that area. I can only imagine what a high he must have felt once a church was up and running. Wipe off one’s hands, pat oneself on the back, job well done.

But as we know from the regularity of Paul’s letters to the churches he helped to establish and deeply loved, the job was never fully done. There were schisms and heresies, there were slip-ups and wolves in sheep’s clothing. There were bewitched followers of Christ, young believers being led astray.

My children, with whom I am again in labor until Christ is formed in you. Galatians 4:19. This phrase reminds me that Paul understood and felt that the work he was called and committed to was an ongoing, labor-intensive one that would not see its full completion until Christ’s return.

On his long days, after hearing from his band of brothers that there were false teachers throwing a monkey wrench in the Church at Galatia or members living in open sin in Corinth, I wonder if Paul looked forward to his tent work. There is a time for tents, you know. A time to sweat and work hard at a task for hours or even days and weeks, only to be able to see a finished work, be it a well-tanned tent, a fruitful garden or a perfectly squared bench. I wonder if, aside from providing financially for his work, Paul’s tent making helped preserve his sanity and perspective for the unending work of soul-keeping. In a highly cerebral, relational and emotional field of work, there is something beautiful and cathartic about working with one’s hands at a task that can be finished and completed.

I can vividly picture an exasperated Paul (he was a human, after all), fuming and fretting with the progress or lack there of the churches, working hard on a tent, sweating out his fears and releasing his failures with every stretch of the skin used for the tents.  I can imagine that as he finished a project, he let out a satisfied sigh of relief as he was reminded that all work builds to a conclusion. When the work is done, it is all worth it.

One day, standing in the new heavens and the new earth, we will sigh with deep satisfaction that the work is finished, that the souls entrusted to us by the Great Shepherd are finally and fully complete in Christ. Until that day, we will need little reminders along the way. A ripe tomato grown in a garden, a lopsided piece of handmade pottery, a freshly-cut front yard, these are little signposts pointing to the relief and rejoicing of a job well done.

When you are stressed and sorrowful over those under your care or when you feel like there is no progress in this highly imperceptible kingdom work, find a little time for your tents, whatever they may be.

“Let us not grow weary in doing good,” Paul told the Galatians and probably himself as he wrote to the struggling church he so loved, “for in due time we will reap if we do not grow weary.” Galatians 6:9. 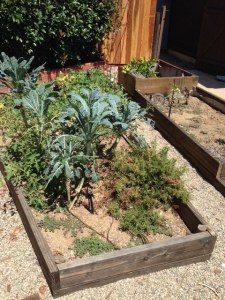