This past Saturday we did something we don’t do enough. We lathered up our olive-skinned boys with sunscreen, packed some snacks and headed to the beach in the early evening. The walls had been closing in on me and my soul had need of vastness and space. Even though I had been awake all day, my heart and mind still seemed sleepy and foggy. Try as I did all day, I could not wake them up; I could not shake a sense of creeping sadness.

Before I even had time to spread out the blanket, the older two boys were goggle-eyed and running to the water with wild abandon. It is significant to note that my children are still not adept swimmers, despite many weeks of swim lessons and much coaxing; however, that slight detail did not stop them from rushing chest deep into the ocean with gusto. 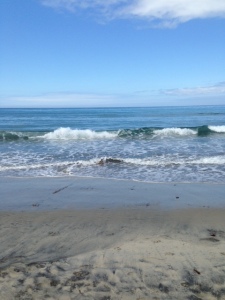 With my toes in the vast Pacific, I stood there watching them in the water (because goodness knows that a trained lifeguard is not enough to cause a momma’s heart to settle). While I am sure that the frigid water helped to shock me back to life, I am more certain that watching my so-very-alive boys fully did the trick.

“Ka-pow!” They would scream as they punched each approaching wave much taller than themselves. After each wave had been subsequently conquered, they would raise both hands in victory and scream with delight. This continued for the better part of an hour.

As I stood there, I could not help but pray that God would make me more like my children.

Being as they weren’t excellent swimmers, they had every reason to be afraid of the never-ending series of approaching waves. Yet there they were, happily and proudly welcoming each wave with excitement.

So often I expect life to be serene lake, still and smooth, controllable, predicable. Then, when the waves come, be they gently lapping waves or ominously crashing waves, I find myself either shocked and scared or disappointed and resentful.

The Lord used my boys to remind me that life truly is a wildly beautiful and unpredictable ocean. The waves come, but we need not run or cower on the shoreline.  We can wade far deeper than is comfortable and face each approaching wave with excitement. We can punch the waves and dance in victory, not because of our ability or our stature, but because of our God.  The One who created the ocean controls its waves. Below, God talks to Job and to us about the vast ocean as if it were a tiny baby, swaddled and held by His hands.

“Or who enclosed the sea with doors when, bursting forth, it went out from the womb; when I made a cloud its garment and thick darkness its swaddling band, and I placed boundaries on it and set a bolt and doors, and I said, ‘Thus far you shall come, but no farther; and here shall your proud waves stop’.” Job 38: 8-11.

As if it were not enough that the ocean of life is contained within His palm, God has gone ever further. He is both transcendent (far-off and other) and immanent (near and approachable), infinitely above us yet stooping to be seen and known.  He stood with us in the ocean through the life of Christ, and continues to stand in us as the Holy Spirit and over us as the Father. We’ve no need to fear the waves; we’ve every reason to face the waves with anticipation and confidence. 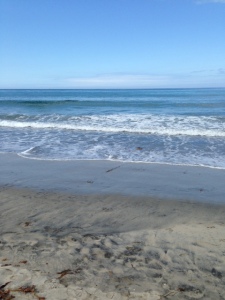 1 thought on “Punching the Waves”