If you were reading a book and saw those two words strung together, you would stop and do a double-take as they don’t belong together. Such a strange combination of words produces two very incongruous images in one’s mind. 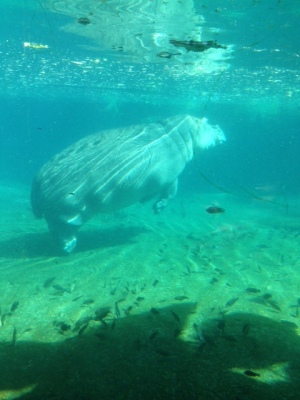 When studying Isaiah 52 this week, I came across such a svelt hippo.

In this chapter, Isaiah has been announcing to God’s captive people the incredible news of an upcoming exodus out of Babylonian captivity.

Most Old Testament prophecies are three-dimensional, having an historical, a Christological and an eschatological fulfillment (a fancy way of saying a back-then fulfillment, an in-Christ fulfillment and a new-heavens-and-new-earth future fulfillment).

That being said, the first 12 verses of Isaiah 52 describe the historical exodus that God’s people would experience at the permission of Cyrus. However, after that, there is a marked shift from the historical fulfillment to the Christological fulfillment. God, through Isaiah, now begins to describe the better, the ultimate exodus from the captivity of sin that would be initiated through Christ’s death and resurrection.

In verse 13, Isaiah paints a picture of a victorious servant who is to come to God’s people.

Behold, my servant will prosper. He will be high and lifted up and greatly exalted.

Prospering, exalted, lifted high. Sounds right, seems congruous with a Savior, one sent from God to rescue His captive people.

Then suddenly, Isaiah continues by introducing the shocking idea that this promised and predicted One will be a suffering servant.

…His appearance was so marred beyond human semblance and his form beyond that of the children of mankind….He had no form or majesty that we should look upon him, no beauty that we should desire him. He was despised and rejected by men; a man of sorrows and acquainted with grief. Isaiah 52:14 & 53:2-3.

These verses must have made the original hearers do a svelt-hippo-double-take. “Say what, Isaiah? I thought you said he was going to prosper and be high and exalted? Where is all this suffering, marred appearance, despised and rejected stuff coming from?”

A prospering, high and exalted Savior is one thing; a suffering and despised Savior is quite another, right? These two images seem completely incompatible to our natural minds, and they surely must have sounded the same to the original audience.

Yet, in Christ, God shows us that prospering and suffering need not be at odds, need not be incongruous, though they often feel so.

On the Cross, suffering and prospering were wed together. The Savior was indeed high and exalted, but only after He was lifted up on the cross of shame. Christ was completely abandoned by men because of His complete abandonment to the Father’s will. He was prospering because He was suffering  faithfully according to the will of His Father.

God decides what prospering looks like, not our flesh, not our comforts, not our culture. It seems, from a broad study of God’s word and a detailed study of the life of Christ, that prospering does not always look or feel like prosperity, as our culture or flesh typically define it.

I want prospering to look like the world’s idea of prosperity. Easy, comfortable, trouble-free, successful days sounds great to me. But God, being God, gets to decide what prospering looks like for His people.

In His infinite wisdom and love, God’s seems to define prospering as running by faith and dependence the race He has set before each of us. We should expect our paths to prospering to include hardships and humiliations, being as they were integral parts to the prosperous path our Savior trod.

Good news, though, we also get to expect joy, sustenance and purpose all along God’s path to prospering, not to mention Resurrection life on the other side of death.

In our minds, prospering and suffering sound as incongruous as a svelt hippo; however, Christ has created a whole new category and build Christianity upon it. The way to prosper is to walk with and like the Suffering Savior, looking to the coming hope of ultimate prosperity with and through Him.

May we become a prosperous people through the power of the Holy Spirit. May we fight against our natural compulsion toward prosperity as the culture and the flesh define it. May we let Christ show us the prospering path.

1 thought on “A Svelt Hippo and a Suffering Savior”