Historically, I am a late adapter. We didn’t catch on to the Downton Abbey craze until about a year before it died out; we still haven’t watched This Is Us (gasp). But, even for me, this one takes the cake.

The Souls of Black Folk was written by W.E.B. Dubois in 1903, and I am just now reading its powerful words in 2017. Talk about late to the game.

I know the race conversation has been dominant in our culture for the past decade or so, but as per my usual, I am slow in catching on to the complexity and significance of the conversation. 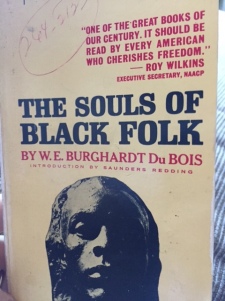 Spurred on by rich conversations with my friends who are African American and by discipling a minority for the first time in my life, I am waking up to the conversations and the causes that have been whizzing all around, unbeknownst to sleepy me.

The recent dialogue concerning Lecrae’s ongoing processing of his race particularly within Reformed circles has grabbed my attention in a way I was not expecting.

For the first time in my life, I am actually trying to understand emotionally, not just intellectually, the complexity of race relations even, and especially, within the Church. Always having been in the dominant culture of the Church, it has been easy for me to navigate conversations about race back to our deepest identity in Christ. While I do believe that this is the singular identity of the people of God, I am beginning to see that our cultural stories affect our understanding and experience of that deepest identity.

I want to borrow (and potentially butcher, as he was far more brilliant on his dumbest day than I would be on my sharpest) a theater analogy from C.S. Lewis’ writings regarding Christian literature and paste it into the arena of the race conversation with the Church.

On the main stage should be Christ and the gospel. He is the main event, and as such, our identities in Him should be paramount. After all, the Church is a motley crew of mixed personalities, races, classes and cultures who share a devotion for the Christ who devoted Himself to us through death on a Cross.

Yet, in the theater, we all have different seats with different angles and lines of vision. If one is sitting in the balcony, one has a certain view of the show. One might see details and nuances that someone sitting close to the orchestra pit could not or would not notice. Likewise, someone sitting in the far right corner will experience the drama of the gospel in a different way then someone dead center or far left.

It seems to me that most of my minority friends within the Church are not trying to steal attention away from the show, the main event, Christ and the shared identity we have in Him. They are merely trying to say that not everyone sits in the same seats, racially, economically and culturally that the dominant culture does.

For years, decades and even centuries and beyond, white, middle class culture has sat in the dominant seat in Reformed Christian circles. This is not to say that there have not always been minorities, both economically and culturally, within the Reformed Protestant movement; they, however, adapted to the culture of the those claiming to sit at dead center of the theater with the perfect and most clear view.

What I see blowing through Reformed circles in the Church is simply a voicing of those who, for various reasons, have seats in other parts of the theater. The danger, of course, is that the seats themselves would become the center of discussion and, whether intentionally or unintentionally, steal the show from Christ and the gospel.

As such, it would look like a bunch of audience members standing up in the middle of the show to argue about who has the better seat and why.

“Well, you have been blocking my view and I have been stuck in this seat.”

“It’s not my fault you are in that seat, I did not choose that for you; talk to the usher, not me.”

“My seat is far superior to yours. I know so because I have always been told so. Only I understand the show perfectly.”

There are many seats in the theater of Christ. When the 12 tribes of Israel used to camp around the arc of the covenant at the center, they each had view points to the arc of God’s presence. The same shekinah glory at the center shone on all.

Our seats matter, the plots of land on which we find ourselves matter, our stories of interacting over the gospel personally and culturally and racially matter.

Yet, we must remember the context. The drama of the kingdom is ongoing, the gospel is meant to steal the show, to draw the gaze of a divergent and often disagreeing crowd from their seats to the stage.

I am not trying to oversimplify complex discussions. I am not trying to glaze over wrongs done and voices hushed and silenced either by choice or force. I am merely trying to understand the bigger picture of what is being played out in Christendom and culture lately. I recognize that for my entire Christian life, I have only noticed my own seat in the theater. I am beginning to see that friends I dearly love sit in different seats. I want to hear what they hear and see what they see because I love them, but also because it will only make me appreciate the masterpiece of the gospel better.