This has bothering me for a while.  Every time I hear another well-intentioned person or motivational meme trying to tell me “I am enough,”  I have to wrestle down the lies again.

I want to believe you, I really do. And I appreciate your overcorrection of our performance and perfection, enhanced, photoshopped beauty culture. I understand that your heart is to help me and every other struggling women to walk in freedom and joy.

But your statement does not work. It does justice to neither the incredibly beauty and potential in me, nor the scary caverns of envy, angry and a myriad of other malefactors that I harbor in my heart.

I am at once deeply flawed and a cherished daughter of the God of the universe. Neither of those qualify in the department “I am enough.”

I would love to believe your platitude and am tempted to from time to time. However, when I lose it with my children after a long day of frustration and interruptions in other realms of life that have nothing to do with them, I see very clearly once again that I am not enough. On my best days when I play the part of merry baker of chocolate chips for an after school snack and get down on my knees and play Legos with my children, I am still not enough. I was never intended to be enough and neither were you.

We were intended to be so much more than enough. As masterpieces of the Master Artist of the Universe whose creative play created sweeping galaxies and microscopic diatoms, all humanity is meant for much higher things that “enough.”

“Man as he is by nature is not as he was when God created him. A vast devastation has struck him. Nevertheless he is great in his ruins. Like a glorious cathedral after a bombing, sinful man still displays the grandeur which was his when he first stood on the earth as created in God’s image. Man is but the wreck of what he once was, but even so he is capable of immense good.” Simon Blocker, Personality Through Prayer

My beef with this seemingly trendy phrase is twofold: it does not say enough and it says too much.  It waters down the two truths that I most desperately need to hear, making both of them inert and powerless. It holds me in a mediocrity that is both too little and too much. 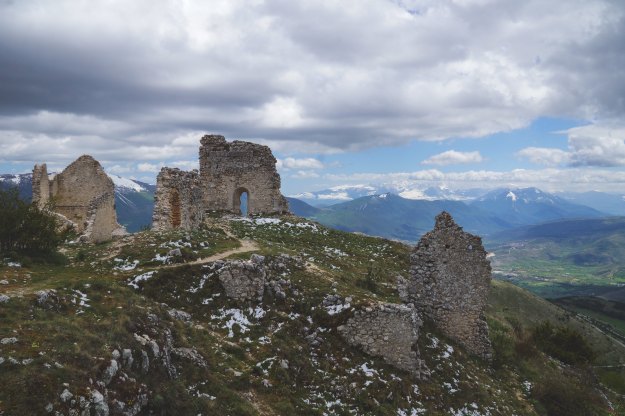 Yet, when I admit and own that I am not enough, that I will fail them and falter, that even on my perfect days there are voids that I cannot fill in them, I find the power your platitude fails to give me.

When I admit I am not enough, I am forced to look to, to run to, to cling to and to depend upon the God who is every bit enough.

In Him, I far exceed enough. I rocket past mediocrity and keeping up with the Joneses, as His perfect power is displayed through my weakness (2 Corinthians 12:9). In Him I am transformed from one level of glory to another (2 Corinthians 3:18), commanded to press on beyond any human standards to take hold of that for which he has laid hold me (Philippians 3:14), and conformed until I begin to resemble the One who redeemed me (Romans 8:29).

The gospel tells me two truths and holds both at full strength.

I am not enough. In Him I am more than enough.

G. K. Chesterton, in his masterpiece Orthodoxy, describes the way that only the gospel holds two paradoxes together without diluting them.

1 thought on “Enough with “You are enough””