I have been looking forward to planting a garden since the day we purchased our new home. As we are on the home stretch of tax season and finally had a free (ish) day, Phin and I declared today was indeed the day.

Phin picked out a new kid-sized rake and proudly carried it around the local hardware store as if he were a seasoned farmer. He talked a big game while we were picking out our veggies for the garden.  He dressed the part and was all smiles…for about ten minutes.

Then it got hot and boring, so he decided he would rather rake the astro-turf in the shade. Then he began making things with sticks. Then he created a puddle with the hose and splashed. 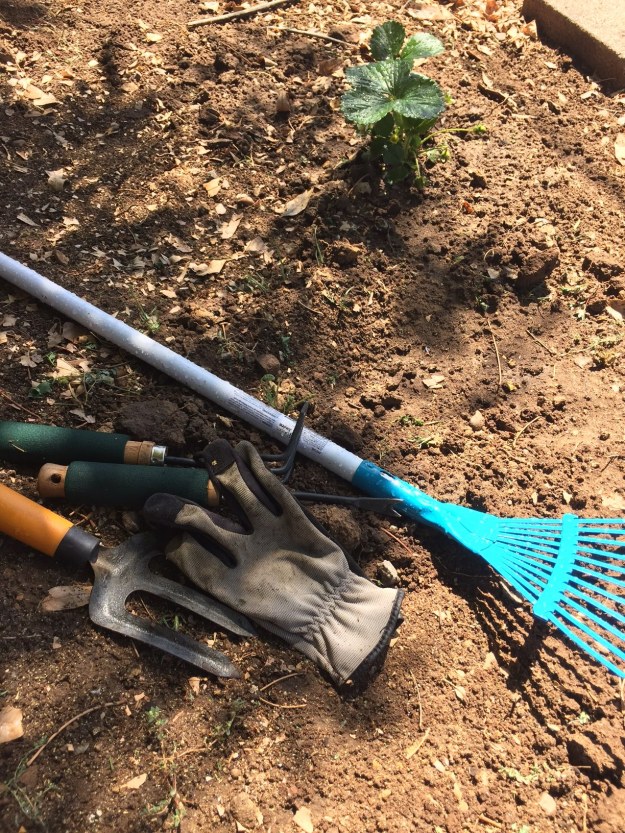 As I continued to sweat, breaking up the hard ground in the future garden, the Lord gently reminded me how often I garden like Phin.

I love to dream about kingdom work. I voraciously read books and gather knowledge about soil and plants, souls and cultures. I look at other kingdom gardens and critique them or gather ideas for my own plot. I even attend conferences to be around others who labor and garden in the kingdom. Yet, all too often, when it comes to actually getting my hands dirty and breaking up rock-solid ground and cultivating sandy soils, I don’t last long. The sun is too hot, the work is too imperceptible, the plants are too flimsy.

God has appointed each of His children a plot of kingdom land to cultivate. Some may be entrusted with rolling acres of kingdom soil, others a sizable backyard, still others the space inside a used tire. He tells us not to compare, either in pride or insecurity, our little kingdom land to any one else’s plot, but to faithfully cultivate as unto Him. The Lord as the Planter, the Gardener, the Vine-tender is laced throughout the overarching narrative of Scripture.  Often times through the prophet Isaiah, God laments over his wayward vineyard, the beloved vineyard he tenderly planted. When Christ painted pictures of the kingdom of God though parables, we see sowers and mustard seeds and gardens and vineyards.

When we become His adopted children, we take on the family business and the father’s passions. Thus, we join Him in His grand scale, century-sweeping gardening. And it isn’t sexy. It is hard, slow work that causes blistered hands and burned skin. Yet, as with planting an actual garden, the work not only promises great reward but also proves to be a reward in and of itself.

A man’s harvest in life will depend entirely on what he sows. If he sows for his own lower nature his harvest will be the decay and death of his own nature. But if he sows for the Spirit, he will reap the harvest of everlasting life from the Spirit. Let us not grow tired of doing good, for, unless we throw in our hand, the ultimate harvest is assured. Let us then do good to all men as opportunity offers, especially to those who belong to the Christian household. (Galatians 6, J.B. Phillips translation).

A strange thing happens when you tend to a garden: you actually begin to care about the little plants, because you have invested in them and they are under your care. I know that my little strawberry plant will probably only provide us with a handful of strawberries all summer, barely enough to make two spinach salads, yet those handful of strawberries will bring me more joy than two Costco flats I could purchase in twenty minutes.

One day, when the Great Gardener returns and combines Heaven and Earth into a garden-like city, I believe we will walk with him around our little plots. I imagine Him pointing out the various plants we have invested in various seasons with great delight. For while the kingdom is quantitative, it is also qualitative. God wants many plants in His  garden, but He knows each plant, notices each new tendril and bud.

I long to walk with Him on that day with the same proud smile I saw Phin donning as he watered our little plot. It may be small, but it is ours. May we tend our little plots by His power, in His presence, to His praise. Small as they may be and insignificant as they may feel, they are pieces of His kingdom, known, seen and loved by the Great Gardener. We may not have a green thumb, but He most certainly does.