Not the yada, yada, yada usually accompanied by an eye-roll and following a long list. A different one. A far better one.

Yadah is a Hebrew word that occurs 114 times in the Old Testament. While it is often translated as to praise or to confess, it comes from the verb that literally means to throw or to cast. 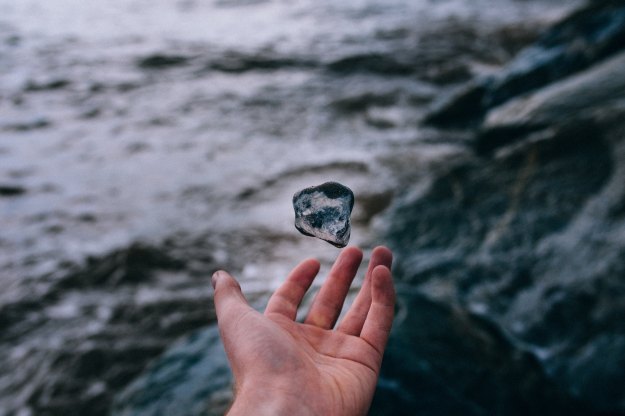 In my study this week, I was struck by the word yadah and its wide range of meaning.  As I meditated on such a diverse group of meanings, the Lord gave a distinct picture of progression from hands gripping sin to open hands to hands full of thanksgiving.

When your people Israel are defeated before the enemy because they have sinned against you, and if they turn again to you and acknowledge your name and pray and plead with you in this house, then hear in heaven and forgive the sin of your people Israel and bring them again to the land that you gave to their fathers. 1 Kings 8:33-34.

Now then make confession to the Lord, the God of your fathers and do his will.
Ezra 10:11.

In confession, we throw down our sins. We let go of them, first releasing our grip on them and then seeking to rid ourselves of them. Confession is our attempt to dispossess the sins and idols that possess us. We are also called to cast out our sins and throw down successes and failures, both of which have a similar tendency to fill our hands and hold us back from more of the gospel.

Rid of the burdens that tend to keep our hands tied down and the trinkets that preoccupy us, our hands are able to be lifted to the Lord. We are in a posture to receive.

Empty-handed, after casting out and throwing down our idols, we can receive the gospel gifts of forgiveness, peace and restored relationship to the One who is the greatest gift. Our hands are once again filled to overflowing with the rich realities of the life, death and resurrection of the God-Man Jesus on our behalf.

The image that comes to mind involves my little boy’s once tiny hands on the rare occasion I actually had a quarter and allowed them to use those germ-infested candy machines in the front of the grocery store. Skittles or tiny Runt bananas and oranges spilling our of their shoveled hands. Too many, too much to be contained in such a small space, bound to overflow to the even more germ-infested floor.

Oh, give thanks to the Lord; call upon His name; make known His deeds among the peoples! Sing to him, sing praises top him. tell of all his wondrous works!
1 Chronicles 16:8-9.

Offer to God a sacrifice of thanksivingfm and perform your vows to the Most High.
Psalm 50:14.

Hands, once full of failure and false lovers, freshly filled to overflowing with gospel gifts, cannot help but throw down thanks and praise. Hands once frantic to control out of fear are quick to throw trust towards the God who brings order out of chaos, whether in the solar system or the soul.

Seen in this progression, the entire life of the Christian will be a series of  yadah, yadah, yadah until we can see and touch the scarred hands of Christ which have enabled such a progression.

For Christ the progression was the opposite. In the fullness of the Trinity, his mouth, hands and being were full of praise and honor directed to the Father through the Spirit. Though being in very nature God, He cast down His preferred place and became Incarnate. His hands, always offered up to the Father’s will and quick to throw Him thanks, were nailed to the tree, picking up our sins and offering them up to the Father.

His perfect life, death and resurrection compel us to continue to come before Him with our own series of yadah, yadah, yadah.

I’ve got to go, I have some casting to do.