Our middle son turns eleven today. He received the Chelsea jersey and soccer ball he has had his eye on for quite some time. His younger brother (who lost his wallet) declared proudly this morning that he was giving Eli the best presents he could afford considering the recent bankruptcy:  “love” and some of his Halloween candy. He received some new Rubix cubes and other thoughtful gifts.

But, as I reflect this morning, we were the ones who received the gifts this year.

Over a month ago, on an ordinary Sunday morning before church, our middle man got stung by a bee. I was out walking the dog when my uncharacteristically alarmed husband called me to ask where I kept our Benadryl.  In a matter of minutes, Eli’s throat was closing, he was throwing up, and his face was swelling.

We immediately called 911. In the few minutes while I was running as fast as my out-of-shape self could from the far side of the neighborhood to get to my boy,  time seemed to stand still.

In those moments, as much as I wanted to get to him, I was confident of his sincere love for the One who loved him first. I knew that even the worst-case-scenario would not and could not separate us because our ultimate end-point, the very lap of Christ, was the same. I simply wanted to see him again first.

Thankfully,  paramedics arrived and were able to get the reaction under control. Thus, beginning the list of gifts God gave us this year as Eli’s parents. 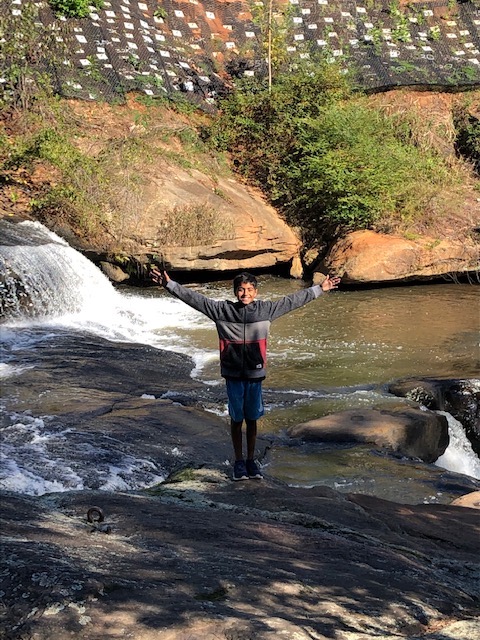 We get more days to come alongside him and prepare him for the eternal days set before him.  We get to watch him grow in wisdom and stature, in fear of God and fear of man. Our days and his days are known and numbered by a loving Father. Your eyes saw his unformed substance; in your book were written, every one of them,  the days that were formed for him, when as yet there was none of them (Psalm 139:16).

We received the reminder that each moment with each of our children is a gift, not a right. While such a reality should go without saying, busyness and routine tend to numb and blind us to the incredible gift of an ordinary day. Oh, Lord, teach us to number our  days that we may present to you a family full of hearts of wisdom (Psalm 90: 12).

Now I see bees everywhere. We all do. And every time we see one, we have the chance to  entrust our Eli to the One who made bees and controls even their stingers. We are all receiving fresh, buzzing refreshers on how to take captive every fearful thought to the obedience of Christ (2 Corinthians 10:5).

While we have Epi-pens at the ready and Benadryl pills tucked into every known bag and crevice of our house, we don’t trust in these things. We trust that the One who made our fierce, brilliant, sugar-loving, Rubix-cube-solving Eli sees, hears, and knows him. Our Eli is ultimately God’s masterpiece, His poema. God has good works prepared since long-ago for our middle man (Ephesians 2:8-9). His will, whatever it may be, will be good and right and perfect.

Eleven years is a gift. Eleven minutes of life on this earth created by an infinitely wise and loving God would be a gift.  Oh, that we would live all our days from Him and through Him and to Him.

I must be going. I have a Hogwart’s letter to write for my eleven-year-old Eli!

2 thoughts on “The Gifts Our Birthday Boy Gave Us”