It’s not too easy to be a tree here in San Diego. If you are Bird of Paradise or an ice plant or a trendy succulent, San Diego is the place to be. Palm trees love it here, as do the ever-ugly Prickly Pear cacti. But for the majority of trees, survival in San Diego is not high percentage option.

Ficus trees, on the other hand, are a different story. Defying the odds and refusing to be contained in a pot or container, these stubborn fellas thrive thanks to their aggressively stubborn roots. We were warned when we planted a few in containers large enough to contain all three of my children that even these would not suffice. Being the plant experts that we clearly are, we ignored the advice. Sure enough, in less than a year, the roots had broken through the bottom of the beautiful hand-made containers and found their way deep into our yard.

Ficus roots have been known to buckle sidewalks and roads with their invasive and aggressive root growth.

Today as I sat looking out into my yard, I found myself praying that my children would be fighters like the Ficus family. 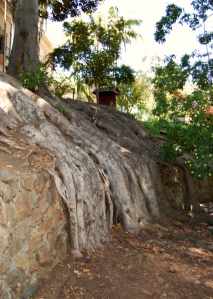 Stubbornness can be easily looked down upon and chided for obvious reasons. Stubborn people are hard to control and contain. They, like the Ficus, often refuse to be kept in a tight boxes or structures; they challenge norms and upset more than the sidewalks that buckle due to Ficus roots.  I have more than a fair share of stubborn humans in my home and have often found myself in tears on account of their immovable nature.

However, Biblically speaking, there is a great place for stubbornness once it has been constrained by God and won to His words and His ways.

Ruth’s stubbornness refused to let Naomi grieve alone and won her a worthy husband despite all the odds. It’s significant to note that Christ was born into the strangely stubborn line of Rahab and Ruth.

Daniel and his stubborn exile buddies Shadrach, Meshach and Abed-nego would probably not have been the boys you wanted your children hanging out with early on. I am sure their mothers lost an exponentially high number of battles over seemingly pointless things. However, when put under God’s authority and used for His glory, their  stubbornness sustained them and their faith in hostile situations.

If it be so, our God whom we will serve is able to deliver us from the furnace of blazing fire, and He will deliver us out of your hand, O King. But even if He does not, let it be known to you, O King, that we are not going to serve your gods or worship the golden image that you have set up. Daniel 3:17-18.

From food to lion’s dens and fiery furnaces, their stubbornness displayed an unwavering trust in God.

The early Church survived thanks to the God-wrought and God-honoring stubbornness of the disciples. Just like a Ficus tree which refused to be contained and whose roots aggressively fight through roadblocks, the early Church pushed through and even thrived on intense opposition. The men who upset the world by proclaiming the existence of an altogether different King were a stubborn, sinewy crew (Acts 17:6-7).

In my training and discipling of my stubborn brood, I long to see their stubbornness kept intact for Christ.  It would be much easier to break their spirits and bleach them altogether of their stubborn streaks, but that would be a terribly selfish act. Rather, in humble reliance upon Divine grace, I am begging that somehow their stubbornness would be shunted toward the kingdom.

Lord, give our spiritual and physical children stubborn roots like the Ficus tree. May they grow beyond the containers that society and circumstances will so often place them in. In drought, may their roots aggressively search for the Living Water. May their lives be those that upset and buckle the parts of society that do not honor you. May they be those who upset the world by saying that there is an altogether different King. May they see this modeled in us. Amen.