Type your search terms above and press return to see the search results.

Having grown up in Catholicism, I have self-consciously walked many an aisle to bed fed a host by a strange hand.

For our First Communion,  all the second graders at St. Rose were dressed to the nines. The girls wore white dresses and flowered veils which I now see as significantly mirroring wedding dresses. If only I had understood that what I was experiencing was intended to be a wedding of sorts, an outward sign meant to express the supposed union of my soul with my eternal husband the Christ.  Instead, I seem to have stood there rather awkwardly in my puffy sleeves. 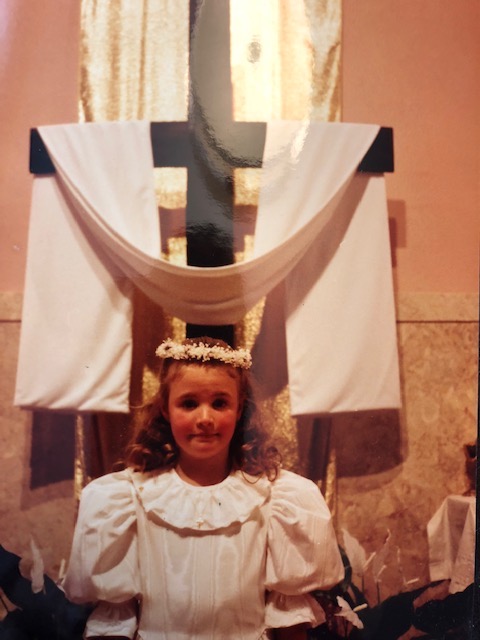 Whether I understood it then or not, having been reared in the Catholic School system hard-wired me with a love for and a pull towards the Eucharist.  A Catholic mass is available everyday for those who would desire to take communion daily.

While I do not adhere to transubstantiation (the belief that the bread and wine actually become the body and blood of Christ) or many other tenants of the Catholic Church, I am deeply appreciative of the centrality of the Eucharist in the Catholic mass.

From my now-Protestant viewpoint, there are a few things that I can see and appreciate most about the Catholic approach to the Eucharist, at least on a purely physical level.

It is offered daily. It physically requires us to be fed, rather than to be deluded into thinking that we can feed ourselves. As such, it is by nature communal. It cannot be done alone or in isolation. It is to be experienced in the presence of at least one other human being, often many more. There is a time of silent kneeling before and after receiving communion. These kinesthetics forced our bodies into uncomfortable postures of humility, attempting to teach our souls to fall in suit.

I find that the Protestant equivalent to the daily offering of communion may have become the idea of a daily quiet time. While I do earnestly believe that it is our soul’s great delight to find themselves happy in the Lord (a la George Mueller), I think that at times, daily devotional times can often atrophy into an attempt at self-nourishment.

I must feed myself. I must say or pray the right things. I must dig up a rich truth or principle. Seen and pushed through such an ego-centric, self-centric lens, even a daily devotional time can lead us away from the gospel.

Do not hear what I am not saying. I am not saying that I don’t believe in a personal devotional life. I most assuredly do; even further, I have been greatly enriched by it. In fact, it a passion of mine to teach women Bible study training tools so that they might rightly interpret the Word of God in the Spirit.

At the same time,  I have fallen into ditches of self-dependence rather than God-dependence many a morning. Bridging my Catholic roots with my Protestant training, I find myself desiring to approach my daily time with the Lord in much the same manner as when I was trained to humbly approach, open my mouth and be fed in the presence of a family.

When I come to the Word or to prayer each day, I tend to approach both as a chef might approach a kitchen fridge or pantry. Open the door. Poke around to see what is there and what you are working with. Attempt to prepare a meal from said raw materials. Stand back proud of your meal.

However, I am fighting to rather approach God’s Word and my slivers of solitude with my Savior in what I conceive to be a more Catholic approach. I kneel down in need. I ask. I am invited to walk towards the One who has a meal prepared for me. I need only open my mouth. He will feed me Himself with Himself.  He bears the burden, provides the food, nay, is the food. He receives the glory while I receive the nourishment.